San Benedetto del Tronto is one of the major cities on the midcoast of the Adriatic Sea and is a well known and much-visited tourist resort, besides being an industrial and commercial centre. Although having no natural inlet, at the beginning of the twentieth century a harbour was built and today it is one of the most important fishing ports in the Mediterranean.

San Benedetto del Tronto was declared a City by Decree of the President of the Republic on 25h October 2000, thanks mainly to the quality of its social services, besides a significant development in all sectors.

The city can boast a favourable geographic position, right at the centre of the Italian peninsula, the Adriatic coast and mid-southern Europe and can easily be reached from any direction and Italian city thanks to a valid road network; its geographical location also offers the possibility to reach quickly both the enchanting landscape of hills, at the foot of which it is situated, and the highest picks of the central Apennines. 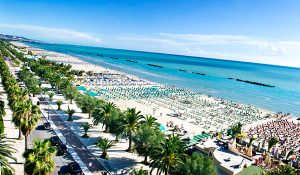 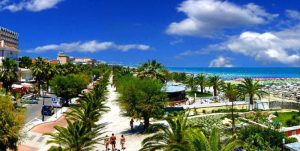 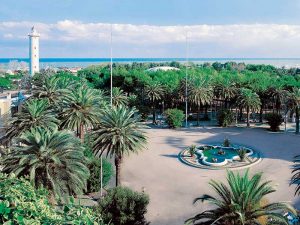 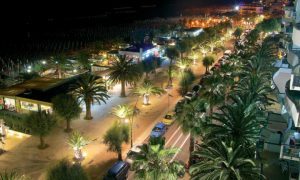 Video about the city https://www.youtube.com/watch?v=axtmgpb5IdA

Brodetto alla Sanbenedettese is, as the name says it, a fish soup typical of San Benedetto del Tronto, a town in the southern part of the region. The recipe comes from the old fishermen that prepared this dish with the parts of the catch that went unsold. Fished used for the soups are cuttlefish, squid, weever, horse mackerel, white skate, sea-hound, monkfish, scorpion fish, shrimp and mantis shrimp; all of this is combined with white onions, red-green peppers, yellow peppers, unripe green tomatoes and extra virgin olive oil. 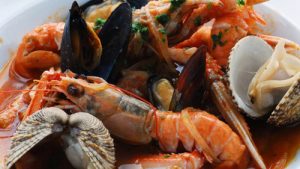 Information about Fiumicino Rome Airport can be found at http://www.adr.it/web/aeroporti-di-roma-en-/pax-fco-fiumicino.

Information about Ciampino Rome Airport can be found at http://www.adr.it/web/aeroporti-di-roma-en-/pax-cia-ciampino.

Bus stop in Ciampino airport is located just outside the terminal building. Take a bus of the Terravision company to Roma Termini Station http://www.terravision.eu/?noredirect=en_US

Information about Bologna Airport can be found at https://www.bologna-airport.it/en/

The train station is located 6 km from the airport and is connected to the airport via shuttle bus service (Aerobus) and taxis.

The flixbus connection is also available from Bologna Airport to San Benedetto https://www.flixbus.it/

Information about Ancona Falconara Airport can be found at http://www.marcheairport.com/en.

Private Taxi from Ancona airport to San Benedetto takes 60 minutes and should cost around 200 Euro. Different companies are available: https://www.rideways.com

Map of the Marche Region

Map of the Marche Region and the main roads to reach San Benedetto. 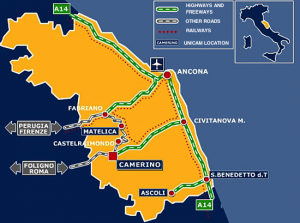 The conference will be held in the premises of University of Camerino – Polo San Benedetto, Lungomare Scipioni,6 63074 – San Benedetto del Tronto.

The building is just on the seaside promenade.

About University of Camerino: 7 centuries of history

University of Camerino is ranked first among the small-scale Italian University (less than 10000 students) according to CENSIS.

Under the new statute, Faculties and Departments have been merged into autonomous structures called University Schools or SARRF, which are responsible for Research and Training. They have scientific, educational, organizational autonomy. Under University Regulations for the administration, the SARRF also have financial management and accounting autonomy. The SARRF unifies  the skills of the previous structure of Departments (research) and Faculties (training). The new units are responsible for conducting and coordinating research, training, transfer of skills and knowledge services.

Part of the programmes may be attended abroad through the strong connections with foreign universities and research institutes the division has. The division has a research background in modelling, analysis, verification and deployment of distributed systems. The University of Camerino and its computer science division offer remarkable research and teaching infrastructures and efficient student services.